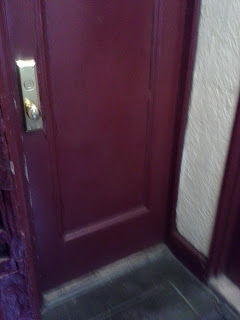 It all started with a brand new entry lock. The door was in the right place...the lock wasn't. It was installed on an emergency exit. Which as I found out later is a no-no. And it put the person coming in and out of it literally on my doorstep. Thus began the first steps of of my involuntary absence. From here and everywhere else that was a refuge for me.

By the time of my last entry on here, the situation with the tenant next door to me was rapidly spinning out of control. It started in October of last year when that lock appeared on the door and caught me off guard. I was even more startled to hear a key being turned constantly as the occupant came in and out, using that door verses the real entry door in the middle of the hall. Wizened up by neighbors years earlier on the revolving door of occupants in that apartment, I went to management to express my concern. Nothing was done. Then one day I met the tenant of that apartment. He was put out as he had found out that I had gone to management to report the lock. With the elaborate story he told about being trapped in a fire I knew that I was dealing with someone who was not mentally all there. He also happened to be over 6 feet tall and close to 250 pounds. I'm 5"2. And despite the facade of being semi pleasant, a warning bell went off that the tenant in 2PA was not a nice person.

Then the noise came. Lots of it. At all hours of the day. I'm not talking the occasional I-need-to-unwind noise, but intolerable. I politely but firmly asked the gentleman to keep it down, at least at night. As that is when I would write. Response? Passive aggressive remarks on why he should be allowed to play his sound system ( I counted five speakers and two sub woofers during an exchange when he was proud to show it off). Went to management again. Nothing happened.

I'm an introvert. I thrive on alone time, or as the books like to point out I get "overstimulated' which translates into not being able to concentrate or unwind. But being an introvert I tried to reflect if maybe I had to bend a little, maybe I wasn't used to having a noisy neighbor...but the warning bell and anxiety wouldn't go away. And then on the day I got my lease renewal, the gentleman next door blasted his equipment for hours on end to the point that my whole apartment was engulfed in sound. I wandered outside, feeling angry and powerless. A vicious pattern developed that every time he heard my key in the lock, the volume skyrocketed.

"Call the cops," was the response I always got. But I knew that could make things worse for me. Especially when the property manager indicated that all concerns were being funnelled to the person who "handled his care".

So for four months I barricaded myself in my bedroom as the rest of my apartment was uninhabitable. But I had no energy to do anything, except get up and sleepwalk through the day job. A friend told me during this time that if God makes you uncomfortable it's for a reason. And the reason all added up to the same conclusion: after seven years in my home and neighborhood it was time to find someplace new.

So off into the real estate waters I went. Bounced to three out of the five boroughs, worn out two pairs of sneakers, and thanks to all the skills acquired digging up info on a man who died 78 years ago, knew how to dig up dirt on landlords to protect myself in the long run. Friends gave me much needed respites during this time for which I will always be grateful. When I finally found my home, blessed by the new york real estate gods with dealing with a small landlord directly, I wasn't quite sure if the fight was over. Then a week after I got the keys, I lugged the aerobed usually reserved for guests in an apartment that had hardly any furniture in it to get the one thing I had been missing for months: silence.

Now instead of hearing someone intentionally turn up their music when they hear my key in the door, I'm greeted by my small neighbor upstairs, a nine month old bulldog named Chomper. I went from living in an apartment complex to living in a house with only two other families. And if this post is a tad long it's because I haven't been able to write in months. So this is my reentry.

The ghost in the fedora with the broken nose will be happy. Time for us to get reacquainted.