Haven't been able to write as much as I would like ( here or elsewhere) which has been driving me up a wall. The job that I go to during the day has been a bit crazier than normal and I didn't have the energy to write anything at night. Add the heat, family drama from afar and my body finally taking charge and making me slow down by causing one of my muscles to go out of wack and you wind up with moi in the present.

But hopefully that will change soon. In the meantime taking advantage of the break for as they say absence makes the heart grow fonder.
Posted by Alana at 8:31 PM 3 comments:

The Past is dead

So let it be

A worn and tattered memory.

Tis better far that we forget.

The past is queer

It will not stay

Buried in the yesterday

Instead it sneaks up

And pokes its finger in your eye.

-Latham Owens
Posted by Alana at 7:17 AM No comments: 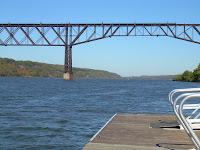 during a two week period when I only had one day off, I flew to the station in time to catch the train to the farthest point I was yet to travel from new york by myself.

I flopped in the seat, lucky to be near the window, seeing lakes and trees and calmness that I hadn't seen yet.

Stood at the edge of the river bank seeing the Hudson expand in ways that seemed to go on forever and a yearning desire to follow it.

think I need to go back.
Posted by Alana at 6:01 PM No comments:

question of the week

Have you ever been stung by a dead bee?
Posted by Alana at 1:59 PM No comments: 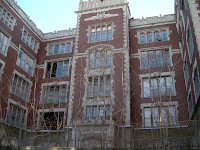 It was abandoned like so many other structures here for decades. Neighborhood lore held that in the bad old days, rival gangs would stash the bodies of their victims in the flooded basement. Was only a legend but it added to its mystery. Built in the late 1800's, the wife of Charles Becker, the only police officer in New York City history to be sent to the electric chair, taught here circa 1900. It was the site of a massive turnout for an electoral vote, one of the first where all of Harlem could participate.

I've only found one picture of it from back then, a grainy black and white photo, showing youths in jaunty caps and filling the entire courtyard, recognizable to me by the high arched windows that frame each side and the two buildings down the street that I pass going home from the train. For years, whenever I would walk by, peering past the overgrown trees and looking into its broken windows, especially noticeable in the summer, the middle sidewalk was eerily cold, even with sunlight beaming down at you. I notice odd things like that.

Neighborhood fought for years to have it turned back into a school. Nasty fights at the community boards, developers lying and saying "there aren't enough children in the area." Bullshit. The walls facing the courtyard were painted in a beautiful mural. Developer said it couldn't be saved. Clutching their trade mark coffees and wearing sweaters that seemed more suited to Vermont they wore looks of fear as staunch old timers and young ones like me shot them down. Now it's destined to be something it never should have been, a luxury amenity. Where children use to learn, soon to be a tenant's lounge and cookie cutter apartments. Windows that once looked onto an open courtyard that welcomed everyone will now see only the handful of people who can afford to live there. If they can at all.

I stand across the street, thinking it looked much better with broken windows, and haunted chandeliers glimpsed through long weeds. And that cold feeling? It's still there.

If your interested in learning more about Charles Becker, pick up The Starker by Rose Keefe