relaxing sound on a warm day

walking aimlessly on the city streets, not too hot of a day, but for someone who lives running on her feet, warmer that usual.

Window shopping, as this was the check that goes towards rent meaning not too much left until next time. That's ok, I have a roof over my head and food to sustain me when the ghosts of the past drain me out.

Drawn into the building with old objects beckoning in the window as I'm a sucker for such things. At the top of the stairs I hear it, that scratchy needle recognizable to me anywhere. I follow the sound to see the horn of the graphophone belting out in the cramped space filled with wax cylinders, microphones and radios. It echoes over the whole floor. The woman winding up the spring, testing old records for a couple that want to borrow it for a wedding and I stand there transfixed, wishing I had that in my house as it seems far more superior to my little boom box for drowning out the obnoxious neighbor blasting techno music when I'm trying to write.

" I think these are appropriate for a wedding, don't you think?" she smiles as she looks up at me.

I nod in agreement. Not bad for a 90 year old entertainment center.
Posted by Alana at 7:05 PM 1 comment:

listening to a conversation.
of someone who sounds like they are settling for something less than they deserve.
trying to make someone feel something they can't.
me, tired, running on vapors, the ghost impatiently floating in the corner.
I don't know what to say to this cycle that repeats itself over and over.
So I remain silent, offering only an ear over a wire.
sometimes it's all one can do.
Posted by Alana at 8:02 PM No comments:

peering in the well with a flashlight...

... can lead to many interesting objects being highlighted in fragmented rays. Some things are stuck in the crevices of the well, no matter how hard you bend over to pull they won't budge. Some things come out in curiosity, wondering where that piercing light came from. Some times the light is too harsh and those things that would like to come out end up burying themselves deeper and deeper into the cool dampness of the shadows in which they dwell.

And if you peer straight down you may see a reflection of yourself in those rays, reflected on a pool of impenetrable blackness. It can either beckon or intimidate. It's up to you on whether you can handle sliding down the slickness of that round cavity, to know what is on the other side of that reflection.
Posted by Alana at 8:38 PM 1 comment:

I do not sit and sigh for wealth untold,

It never thrusts itself into my schemes;

I shrink from all your piles of clanking gold,

A life of limousined and jeweled ease is but a round of fathomless ennui.

Your motor cars, your pearls, your sables, these are naught to me.

Better a homely flat in Harlem's wilds, than a costly living's spurious benefits.

Better a simple buttercake at Childs' than caviar and stalled ox at the Ritz.

Your unearned gold to me, is shot with flaws; A life of honest toil I'd make my lot.

Which really makes it very nice, because it's what I've got.

-Dorothy Parker
Posted by Alana at 7:42 PM No comments:

power of a memory 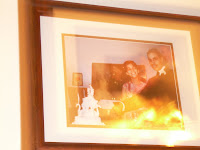 How do you compact five decades of memories into one afternoon? I guess in instances like this time cannot be molded. I had never seen this until a few weeks ago, but there it was in a new frame, above the picture of my father and his brother and sisters.
In a house full of five decades of memories. Some good, some not so good. '
Pictures of cars that once had running boards wide enough for a man to stand on the side of and hoods long enough to stretch on.
Of my great grandparents, one of which I had the pleasure to meet and know in my lifetime. Her handmade Japanese panel hangs on my wall and an old camera is hidden in a drawer somewhere.
Photos of me I never knew existed and memories of which I cannot recall.
This photo was the first time I saw my grandfather smile. I guess three decades on the police force as a detective will do something to ya. Till this day I swear he's profiling people in public. My grandmother still has that smile of mischief and a hidden giggle. Still remembers the first time she saw him in the playground with his hat and the color shirt he was wearing. You don't hear things like that anymore.
She asked me to bless the table and I didn't even blink. As everyone joined hands, both of them surrounded by their two sons and daughters, friends and family, a memory was created for me that will last a lifetime.
After I was done with my little speech of which I had no clue what I was saying, I saw my grandparents cry for the first time. And for the second time I saw my grandfather smile.
Posted by Alana at 8:35 PM No comments:

signs of a new beginning 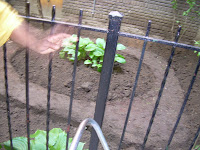 She comes out every spring to replant all the gardens. A skill perfected over 40 years in her home, talents she got from her mother and father years before that in that distant homeland south of the equator. I always know it's spring by seeing her rake and shovel propped up against the wall opposite my kitchen window.

She was out early this morning and worked well into the evening, her voice giving words of encouragement to the property maintenance crew who always help. She asks if I would ever go into the garden but my talents always seem to work with plants that grow indoors. But maybe one day.

And as she rarely lets me take her picture I managed to sneak one while she was giving directions for where the perennials and rose bushes will go. Of course of her prior plantings are hiding her bright yellow shirt, wind visor and apron filled with seeds. 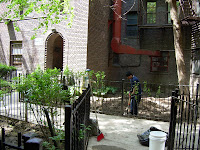