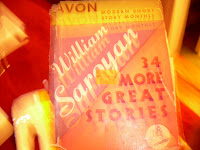 I don't know how old it is, at the bottom it said it sold for 25 cents when it was brand new a long time ago. Even a coupon clung to its backside with the notation " ask your newsdealer about special offers!". But it was in pretty bad shape. Sent to the dollar pile of the castoffs of the 18,000 miles of books-bookstore. Me, always having a soft spot for the orphaned printed word spotted it face up on the damp ground, flung in the corner where it had fallen. The sides looked as if someone had burnt it, large chunks where missing from the spine and even the delicate page turn in my hands sent pieces of brittle paper spraying my coat.
But it still looked interesting by the pages that remained in tact and I figured I had a warm home it could spend the rest of its days verses a shelf barely covered from the raindrops dripping from above. So now it sits in comfort on my already crowded bookcase.
Posted by Alana at 6:05 PM No comments:

bouncing on a train to another city, this time with unexpected company in the form of my friend and colleague from the museum of the other city I left..she came to spend the day with me and I rewarded her with dragging her somewhere else other than the concrete jungle. Cause as I've learned it's better to get blank stares and mouths dropping to the floor in person than being passed from phone extension to phone extension.

Was worth the trip in many ways. Catching up with someone special, seeing frozen in time buildings of all shapes and sizes ( note to self, go early next time to discreetly snap more photos). The best treat was the domed ceiling, peeling paint and extensive moldings of the old courthouse as we walked through the musty corridors of typical government offices. And the comedy begins:

Agent: "No, no go out this building to ghdhdfhshssh" ( as in could not make it out, was a cross between Fulton, Hustle and something else). "At the light, that's the archives."

Back on the sidewalk, turned to Susie " OK, the light is over there so maybe it's that way. What the hell did she say?"

Susie: " I think she said Hill, there's Hill over there." We go another way, stop to ask a cop who was actually friendly, hence a quizzical look on my face. New York City cops don't smile like that.

Go back the other direction, find the un-pronouncable street with a building correctly named Archives and begin all over again. More dumbfounded looks between a security guard and a voice over an office partition.

" You gotta go to the City Clerk."

Susie: " We were just there and they told us to come here."

Finally after double talk they produce a form that I have to fill out only to take back to the office that we just left. I ended it by saying I didn't care what it was, it could be one sheet of paper, all I knew was the city had something in their files and I just wanted to see it. They take the form, log it and then say for another leg of the journey.

So off we bounce to yet another courthouse and arrive in a very old school little office that has three arrows: Bail Bonds, Complaints and Information. Except there was no information desk, just a tablet for you to write your name and what you were there for. At least I made it farther than I had in the past but the conversations around me told me people had more important things to deal with. Namely, the poor person who had to listen to the File a Complaint line. The last thing Susie and I heard before me saying I would do this part of the adventure another day was:

" This is your ninth arrest."

"So what? That doesn't give him the right to take my car!"

Me to Susie: " Let's go, and thanks for coming with me. Now you know what I go through most of the time."

Get on the elevator, hit the wrong button and end up in the Prisoners Detention Bureau and Susie bursts out laughing.

And back to the concrete jungle we go so she can at least see apart of that city.

I wish upon a star

The old bones spoke, but they did not give direct answers...

Here's wishing they speak fast enough for the large files to come in before my mental break from my other job ends next week. As for directly, they never do so I'm not even gonna hope for that.
Posted by Alana at 9:20 PM 2 comments:

words of reflection, seventy one years later, from a usually tightlipped source

" I have a dollar in my pocket. And as long as I have that I can't be broke."

statement made during his criminal trial to a reporter's question on rumors that he was dead broke.
Posted by Alana at 9:10 PM No comments:

Whenever I venture back to the city that I left, I have to go in and stop to visit the dust and old scents of the museum I left behind. Though according to the curator I never left. I am a "consultant". I just live far away. Thus begins the usual playful banter amongst oil paintings of men long gone, a giant 100 year old cash register that has to sit on a dolly to support its weight and other unknown nick knacks whose purpose are written on faded old cards.

"Sure, no one has been up to see it since you were last here."

" That's why you should give it to me. I will take good care of it. Anyway, you have at least twelve of them, you won't miss it."

He smiles and gently shakes his head like a parent. But he gives me the keys to the vault to go "and say hello."

So I make my way through the maze of tunnels to the 77 year old Otis elevator, pull the heavy gate and push the knob to the 4th floor. It bounces and clicks until dropping me off in a dark tunnel. I went this way a thousand times and know where to go until I reach the gate that says "museum artifacts are happier in the dark."

Unlocking the gate and going past light bulbs, model airplanes, 90 year old typewriters and city replicas I make my way to the back to the heavy graphophone featured in the 1896 World's Fair that won my heart all those years ago. And with slight touch of an old spring it hums back to life and warms my heart until the next visit.

box to fold myself into in place.

Notes on subject in folder are tucked in the side seam. that should maintain my sanity.

a large bottle of patience sits on top of bag.

sticky note reminding me of whatever I need to remember stuck to my head.