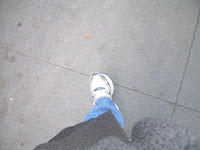 After suffering through a library induced headache, I headed south for coffee and food, suddenly stumbled across this, a place I hadn't been to in a long time,,, 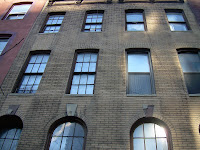 through the eyes of that second story window I got my first preview of my new home. Sounds of trucks rumbling up and down the avenue at all hours. I was excited at being invited back to this city twice in one week due to an interview ( I got picked! yay!) and a friend was renting a sublet at this address. Never heard of a sublet, let alone been in one at that time. My old hometown is filled primarily with single family homes, or duplexes. If apartments existed they were camouflaged behind screen porches and front yards, mostly of the asphalt variety. If you actually got grass you guarded it. 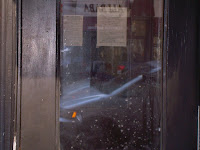 the halls were just as dark as the vestibule. Sickly yellow and brown hallways, white florescent light in the hall and my other first encounter as an immigrant in a new world: A shared bathroom in the hall with the other tenants on the floor, with a shower head facing me directly in the face, verses planted on the wall to your left or your right. Those shower heads provided dark comedy in another sublet ( one I moved into after I knew what the word meant and before I was lucky enough to get my own space) when my slightly off her rocker roommate forgot to put the liner in the tub and the power of the water pressure leaked through the tiles to the chandelier in the lobby and set it on fire.
She didn't know what happened until the super came up with a firefighter. I didn't know until I came home from walking around my new home and saw the water marks on the lobby floor and soaked tiles in the bathroom. At any rate this bathroom was dark too, bulbs deciding they didn't want to work anymore. A cold water flat in another era.
I darted out of that vestibule to interviews, the Empire State building looming up ahead and me being stupid enough to wear heels four avenues and six streets over ( I quickly learned my lesson). I got the job and the rewarding sound of that noise in a different neighborhood.
The buiding appears to be empty now, black bags cover all the windows. Probably destined to be turned into something else.
on the way back home from coffee and food, I came across this. fitting for that other memory I am trying to reconstruct piece by piece as best I can. 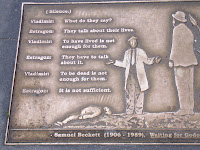 wish for a moment

I want to go down to the open sea, I'll search for a sunlit strand.
Where clean scented winds blow cool and free, o'er glittering swirling sand.

I want to go out on the sparkling shore, where frolicsome wavelets play.
I'm yearning to feel on my cheek once more, the kiss of the ardent spray.

There's longing down deep in the heart of me, to look on the sun-shot foam.
I want to go down to the open sea, and then I'll come right back home.

from Wanderlust, Dorothy Parker
Posted by Alana at 6:35 PM No comments:

An older woman sits on chair outside her apartment on the Grand Concourse. A large pitbull sits next to her staring in the opposite direction. Neighbor comes out and says hello.

"Mine? Oh no, he belongs to the store. You thought he was mine? Lord, he's bigger than my whole apartment!"

First one: " Did you hear about Joel? He was dead broke, played a dollar and got almost a hundred grand!"

Sign on the side of an apartment complex from over 70 years ago advertising for "Available Apartments" "Inquire within" or call the owner at Jerome-7119.