a much needed escape from the dark cloud generated by others that persisted over the turkey on the table yielded small clues to my state of mind...

dinner with a friend on an eerily quiet street in a city that for the most part is eerily quiet.

Me: " I found out that the rabbi who helped my grandfather just died in 2001 and he and his family lived in Brooklyn. I don't know if his wife is still alive but I thought about reaching out if I could."

Me: "I don't think the synagogue he went to is here anymore. It says it is now a conservative congregation in Virginia, back then it was located on... on the Upper East Side...er, I mean the northeast."

Friend starts laughing and observes amusingly that I am no longer apart of this city.

" How did you get here?" she asks as we begin to walk.

Friend laughs again, " you took the subway from New York to here?"

" I meant the train. I guess you can see where my head is right now."

We walk down a quiet street lamplight illuminating small pieces of it. I don't remember things being this way but then again I was never allowed to walk out at night when I use to live here.

When we reach the main artery of the city, I look south towards the yellowish glow of the clock in city hall and recall a dream I had recently. I was standing in the middle of a traffic divider and the whole street was plunged in darkness except for that yellow clock. I couldn't run as I was wearing heels.

Part of me wanted to go into all those decrepit structures that line each side of that artery for blocks on end, details from an era long gone, and the other part wanted to run towards that clock. Cause on the other side of it was the train that would take me to the city that was my home.
Posted by Alana at 7:32 PM 2 comments:

take two a day with water 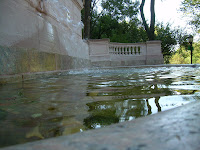 
Here's hoping that in the chaos of the next few days, my soul can be as calm as that reflection and not turn into Niagara falls. And that some of my scribblings and notes in a tattered book and photostatic images can keep me grounded.

The sky falls to the sea, The moon slips to the waning.
Dark flame piles the shore lights
Immerse in the sable river.
Luminous harps the ferries in tremolo string under water.

On either side, phantasmal, flung deep in the night mist,
The cities rest beneath shoals of stars
Low fallen from heaven.

one is mine, the other belonged to my great grandmother. Neither of them could resist the opportunity for a photo-op for the album I have in my heart.
Posted by Alana at 7:03 PM 2 comments:

visit to the ol' block

bounced around the old neighborhood with a friend. Very happy ( and relieved) that not much has changed since I left as everything in this town seems to always be under the shadow of a nameless, faceless developer. Sure you had the occasional bar or boutique shop but they were oddities that blended in. Sidewalks still spilled with the stuff of people's lives from the past. An old cast iron teapot belonging to an Indian family, an old handle dangling with iron keys, Hebrew letters carved into a plaque, glassware, food carts making fresh empanadas, gyros and anything else. multiple tongues spoken and screamed from every corner, the bakeries, shoe shops and restaurants.

I would have stayed in this neighborhood, except the roommate was a bit off her knocker ( for another post) and I didn't quite feel that I belonged, it wasn't my home I was living in someone else's space with only a suitcase full of clothes and whatever books I could carry with me. So I dragged everything over sixty blocks down to a place that became my own.

Pass a man selling book bags. My friend recognizes him as she has bought bags from him before.

"Evening Ladies, how are ya?"

"You're downtown sometimes aren't you?"

"Sure, why you seen me before?"

"Yeah. I bought a bag from you before."

"Yup, I take everything with me so I move all over. You can't shoot a moving target eh?" He smiles and winks.

We smile back and continue on.
Posted by Alana at 5:54 PM No comments:

We can only offer , that which we have to give. We can't make others accept it.

I can live with the idea that we are merely actors playing a part. But I do wish whoever is writing my script would learn to use a few more happy endings.

Many people complain life never gave them any chances. We are given Life. We must take the Chances.

Trusty computer gives a slight warning sign that it will be time soon for me to let it go to electronic heaven. I hate shopping and I hate shopping for an expensive workhorse not exactly in my budget. get complexed looks from sales people when I tell them I ain't interested in something that can think for itself and dazzle me for hours on end as if I were a baby. I just need it to run. and save my book and pictures. That's it.

Find one and hears hoping trusty computer hangs on long enough for me to sell bootleg hooch to get it's replacement.

now I hear humming from another part of my house, so I gotta wait for somebody to come and look at that. I guess that is the upside to apartment living.

Then the cranky ghost decides to do a teaser and show two documents on a microfilm that doesn't run in sequence..nothing before or after.

I'm about to turn into the pyscho weasel from who framed roger rabbit.
Posted by Alana at 6:21 PM No comments: