going back in time to move forward.. 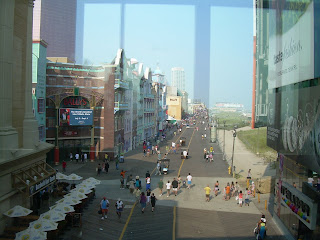 Schifft's Pier, Fralingers, White House Subs, Ocean One mall with the Arcade and Atlantic bookstore on the top floor. Those forbidden dens of brightly lit machines that only adults could go into, the plush carpets and chandeliers that I proudly told my father I wanted in my own house when I grew up...

My first real vacation, the only noise I heard were the hysterical laughter of seagulls, the crashes of waves. Pausing at the ramp right next to Fralingers, a powerful memory of my father parking the car at the end of the street, me and my cousins running up the boards with buckets, blankets and an umbrella, with a cooler packed with sandwiches made by my grandmother. Ham and cheese on white bread, and a handful of salt water taffy from Fralingers, it's red awning right on the corner.

White House, best subs in town since 1946, nothing has changed, same orange colored walls, same men behind the counter albeit much older. Now I can look over the counter and see them as they prepare the order but remember the excitement of Italian rolls disappearing from sight to be placed in large bags filled with yummy food.

Ocean One mall is no more, it's skeleton remains now filled with shops outside my budget. The length of an ocean liner extended into the ocean the decks are still there. Walking along the beach I get slammed by waves, welcoming me back and punishing me for being away for so long. stress, worry and fear and doubt get swept away with each tide.

A time of innocence, a time of confidences.

Long ago, it must be, I have a photograph,

Preserve your memories, they're all that's left you.

-Bookends Theme
Posted by Alana at 3:11 PM No comments: 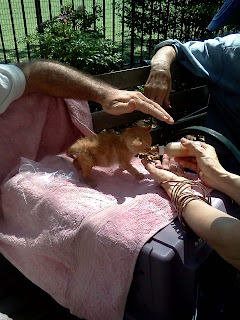 this is Lucky, or Tiny Tim..I like the first name better. He was found in a driveway, probably the runt of the litter as his mother was nowhere in sight and he still had the afterbirth on him when a dog performing the role of surrogate mother began cleaning him off. To the man who rescued him and gave him a home with ten other brothers and sisters he thought he was a tennis ball.

Now he's a curious 5 week old rascal who posed for the camera when my friend took his picture in between feeding him. She got it right, I got it wrong as he became a wee bit agitated when the milk wasn't coming out of the bottle. 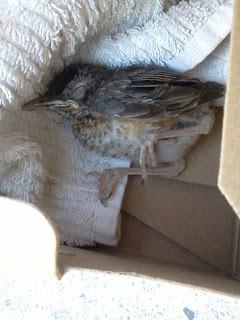 this my Lucky...well not really mine, but I found him and I didn't want to keep calling him baby bird. On a hot Sunday, quite a few blocks from home, lost in my own thoughts, something moving near the curb caught my eye. This baby had fallen out of its nest, breaking its leg and was using all of its energy to push up against the curb, and almost into traffic. I could tell by its labored breathing that it was taking everything out of it.

I didn't want to leave it, but didn't know what to do. The city hot line told me there was an animal hospital on the opposite side of town from where I was that could take it, provided I put it in a box. So in 90 degree weather I rushed home and grabbed gloves, a washcloth and the perfectly sized Panasonic battery box from the bodega owner on the corner. Reaching back to the bird he had surprisingly pushed himself even further down the street. I learned later that it was a baby robin which explained why it wobbled hurriedly towards me with its mouth open when I crouched in the street as my tank top was the color of an adult robin's chest.

Cross town to the hospital, only to be told that there were no vets on staff, that I could take him the next morning to the wildlife rehabilitator all the way back cross town, as they were closed.

"You gotta keep him for the night, if you leave him here he will die."

"What am I supposed to do with him?" a perplexed me countered as my new lodger banged in his box. Food ( which didn't work) and keep him safe.

Back in my apartment I whistle for Lucky to eat ( he chirps back but refuses to open his mouth for any other purpose) I look up that baby robins eat between sunrise and sunset so I rationalize in my head that he simply missed his last meal. In the cool darkness of my bedroom I sit his box on the floor and then proceed to wake up every hour to check that he is still alive.

"Please don't die." His wings moving up and down show me that he is alright...

Then promptly at 5:15 just when I begin to fall asleep, little Lucky starts chirping up a storm, despite my gratitude that he's alive and my pleas for him to be quiet for at least another hour and then I would take him to a nice place where he could eat real food and get his leg fixed. He obliges by turning into a snooze alarm and chirping every 5 minutes.

Bus ride downtown, a moment of panic in the box when an ambulance rolls by but then quietness when the nice wildlife people take him in.

I found myself the other day crouched on the floor of a bookstore and was engrossed in a book that advertised itself as therapy for writers or something of the sort. Writer is a word that I find hard to identify with at times even after well appreciated critiques of this project that I am engrossed in. There are many others I am in awe of who I think carry that mantle very well.

But there were many things in this little therapy session I could identify with ( silly me, thinking it was all in my head). This one had me rolling in unexpected laughter that was very much needed at the moment:

Writer's Block: When your imaginary friends won't talk to you.-Unknown

When I am lonesome
I look up to the clouds
For they tell me of how
They come and go.


When I am confused
I listen to the wind
For it tells me
What is best for me.

When I am mad I
Listen to the waters flow
It helps clear my mind.
Posted by Alana at 11:52 AM No comments: