The ghosts of new year 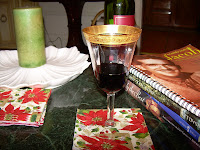 the name of the man who moved in 82 years ago is still on the front door. Telephone wiring from an era long gone still runs on the baseboards. Original moldings, furniture and pictures throughout, including a letter carrier from around 1910 showing the first Model T's. My neighbor had knocked on my door the night before asking if I would like to ring in the new year with her, her sister and uncle. I had planned to spend it curled up in my living room or working on my project, but I happily obliged.

The air was warm and inviting and people who I consider to be family warmly welcomed me. I long ago accepted ghosts as constant companions, in my field of interest they would be hard to ignore. So it came as no surprise when my neighbor said as if it were a common occurrence that the gold trimmed glasses used to ring in this new and unknown year where originally brought by her now deceased husband's mother sometime in the then unknown decade known as the Twenties. Still intact, gold trim and all, bought long before they were born. I had never known people to possess such tangible objects connecting the past and the present until I moved here. Maybe because in my family such things are lost, fought over by elders or hidden in secret places until people forget about their very existence.

We danced in her living room to music from the 50's, me promising to return for the big dinner scheduled for later in the day with more people, and eventually me leaving her and her ghostly companions behind and returning to mine spread out in the stacks paper where I had left them.

Happy New Year Everyone!
Posted by Alana at 8:41 AM No comments: