An Unusual Measurement of Personality 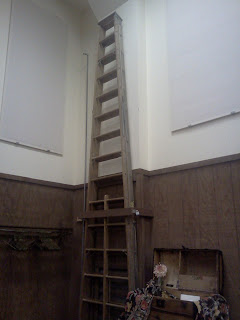 It was the tallest ladder I had ever seen. I marveled it more out of curiosity than a desire to scale it.  During a weekend preparing for a wedding reception it was nice to look at in between cutting flowers and setting forks.
The uncle of the friend who was having the reception, who owned the ladder and the barn it sat in watched me counting all those rings.
" Wanna go up?"
" Nah, that's alright..it's impressive though"
Before I knew it the ladder was spread out in the middle of the floor in the midst of pumpkins, flowers and fake fall leaves. A huge grin was spreading across Uncle John's face.
" Go on! Climb up!"
I laughed, placed the flowers in my hand on the table and to the cheers of my friend who finally looked up from arranging party favors, slowly climbed the steps one by one. 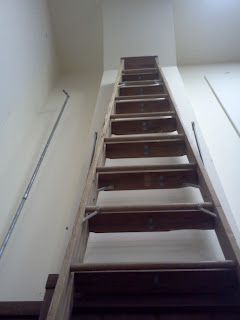 I got within five of the top rungs before I loudly shouted that I didn't want to go any further. The view from where I was satisfied me. I didn't need to touch the light bulb in the ceiling.
During the dinner, Uncle John explained that he was able to measure his children's personalities based on that ladder.
" My eldest boy Justin, no more than four years old. Saw him eyeing that ladder. I pulled it out. He climbed up one step, looked around and went back down. He did that for each step, all the way to the top."
" My second boy, Tim shot straight to the top, looked around and screamed. Had to climb up there and bring him back."
" One was methodically, the other brash"
Contemplating this I glanced at the ladder in the corner and summarized myself. " Guess you could say I know when I've reached my limit and satisfied with what I got."
Uncle John smiled and nodded in agreement.